Part One: What to Say to Someone Struggling with Fertility Issues

We live in a world where people chronically overshare. In this selfie-obsessed, meal instagramming, uber-documented world we live in, there are still some things that people are afraid to talk about. Fertility struggles are in that category. As a fertility acupuncturist in Portland, I want to end the stigma and isolation that comes with fertility issues.

Daily I am confronted by the loneliness endured by men and women experiencing fertility difficulties. They come into my acupuncture practice in various stages of hope and despair. Sometimes I am the only one they talk to about their struggles besides their significant other. I can relate. This is how I handled things when I wasn’t getting pregnant. In isolation. This is not how it needs to be.

While it’s true that some people don’t want to share their fertility struggles because they are dealing with their own internal battles between fear and hope and hopelessness and failure, I think most suffer alone for a different reason.

The bigger reason that people continue to suffer alone is because of the culture of silence surrounding fertility issues. If we lived in a culture willing to discuss uncomfortable, scary, sad things, people would know they weren’t alone. They wouldn’t be so quick to blame themselves, or to think of themselves as failures.

Too many people are terrified of emotional interactions, and this is causing people to shrink away and suffer in silence. 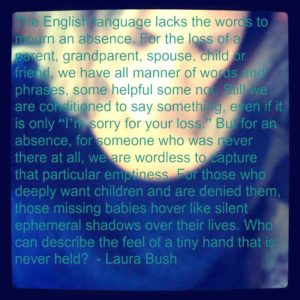 You don’t know what the right thing is to say, so instead you say nothing. All the while knowing that your friend or family member is struggling.

I have made many missteps in my own conversations (or lack thereof) with friends and family members who were trying to conceive, but after helping many couples through it, I have something to share. I want you to know how to talk to someone you care about — how to bring it up, how to respond, and how to support them if they share this vulnerability with you.

The very first thing I implore you to do is this: stop casually asking women “of a certain age” who are in committed relationships when they are going to have kids. Believe me, I’ve done this plenty, but I no longer ask casually. The reason is twofold. First of all you are assuming that the person in questions wants to have kids. Secondly, you might be putting a woman with fertility issues in the difficult situation of either sharing this intimate information with you or lying to you.

I’m not saying that the topic shouldn’t be broached; just don’t do it casually. That means don’t ask at a wedding reception, in the grocery store, or in passing. Ask women and men that you have close relationships with when it would be stranger not to ask. You know — the friends who love kids, used to talk about having kids, and now 5 years into their happy marriage don’t ever bring it up anymore. When you ask this question, do it with tact and compassion. Be prepared for the whole range of possible answers. Ask it one-on-one, and make it simple: Are you and Dave planning on having kids?

Asking this way makes no assumptions. It also allows for the person you are asking to simply say “Yes” if they don’t want to elaborate. Most importantly, it gives them the chance to open up to you if they want to. It allows them to bring you into a big part of their life, and it gives you the opportunity to truly be a friend.

In fact, this is my second point: Talk about it.

Don’t let fertility issues become the elephant in the room of your relationship.

If you have friends you suspect or know are having a hard time getting pregnant, don’t make them struggle alone. Bring it up. Again, do it at the right time and in the right place. But don’t just ignore it. Don’t pull back from them, or stop inviting them to your kids’ birthday parties or stop asking them how they are doing.

The caveat here is a big one: Don’t stop talking to them about it, but always give them the option to stop the conversation. Be direct. Ask them what level of involvement they want from you. Don’t push. This isn’t about you or your friendship — it’s about them. As with all potentially emotional conversations, don’t avoid this because it might be uncomfortable. Our incredible ability to empathize and sympathize are part of what separates us from the rest of the animal kingdom — don’t shy away from it.

Don’t neglect to ask because you are afraid you might say the wrong thing. Admit it. Let yourself be vulnerable by admitting that you don’t know how to bring it up. It’s ok to start your conversation off with, “I’m afraid of saying the wrong thing, but I want to acknowledge what you are going through.  I want to let you know I’m here for you if you need me.” It’s ok to make a misstep. Just let them know that you are there for support if they want it.

They may tell you they don’t want to talk about it. Fine. That’s ok. This isn’t about you. This is about being a friend, and giving someone you care about the space to confide in you or not. It very much lets them know that they are not alone.

It is equally important not to bring it up too much. How much is too much? Let’s just say that you needn’t keep track of your friend’s cycle and ask her leading up to every period whether or not she thinks she’s pregnant. Don’t ask every month if she’s pregnant. Don’t ask her every time you see her drinking water instead of a beer if she’s pregnant. In short, don’t hound her. It is hard, very, very hard to forget about the fact that you are not pregnant when you desperately want to be, so let her forget sometimes.

You also need to let her push you away sometimes. Some women (occasionally men do this too, but it is almost exclusively women) cannot bear to be around their pregnant friends or their friends’ kids. Sometimes they just can’t handle one more reminder of the fact that you have what they want. This does not make them bad friends. I know it seems selfish, and it might even hurt. Sometimes the grief that comes along with fertility struggles is just too much.

If you have a friend who has been trying to conceive and is pushing you away now that you are pregnant — talk to her. In private, tell her your concerns, your fears. Tell her that you want her to be honest with you, and that you will try to honor that. Don’t push. Don’t try to make her feel guilty — she already does. Some friendships cannot survive this. If you talk about it and keep the lines of communication open, most friendships will.