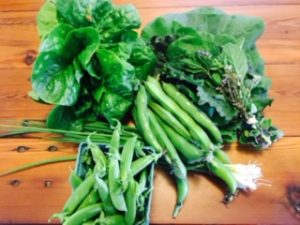 Week Five is Complete. Today I pick up my new batch of fresh veggies and herbs, so it’s time to share with you how we ate the food we received last week.

Last week we got a nice big bunch of vegetables, and we had a lot of fun eating them all. We got the following: green garlic, a bunch of kale, head lettuce, fava beans, and snap peas. Our herb bunch included mint, sage, thyme, and oregano. The only thing we had a hard time using were the fava beans, but that is because until the weekend (when we were out of town), it was rainy and cold and we were waiting to throw them on the grill!

Here’s the quick list of how we used our fresh veggies this week:

This week we didn’t use the lettuce right away. We are getting deep into lettuce season right now, and in addition to the CSA, we also have lettuce growing wild in our garden. As the first part of the week was rainy and cold, we didn’t use the lettuce until dinner last night. We made a great big salad, with roasted chicken, tossed with homemade ranch dressing. We threw in a bunch of pre-diced veggies that were left from taco night the previous day: yellow peppers, carrots, cherry tomatoes, black olives, zucchini.

The minute we got home with our CSA haul, I knew I wanted to sautée these three items together to eat as a side with the white fish we were having for dinner. I cut the kale and sage into ribbons, thinly sliced the garlic, and sautéed it all in our cast iron skillet in plenty of butter and olive oil. I tossed in a tiny bit of lemon juice and a splash of a rose we had open in the fridge just to add a little brightness right at the end. Even the kids liked it, and the bitterness of the greens really complimented the sweetness of the fish.

Finally warm and dry enough to get the grill out, at the end of the weekend we grilled up the fava beans. We drizzled them in olive oil and sprinkled them with salt, and grilled them until the outsides were a little charred. Then we peeled them open and ate the beans inside. I think of them as giant edamame. You can also boil them in salted water if grilling isn’t an option. A delicious pre-dinner snack.

Snap peas never last too long in our house. The kids ate at least half of them before dinner the night I brought them home. The other half went into a simple stir-fry I made the following night. I rough chopped the peas, some mushrooms, bell peppers, sweet potatoes, and broccoli and lightly sautéed them. Then I added them to the sauce: coconut milk (full fat), Bragg’s amino acid, garlic, some red curry paste, and a splash of lime juice and simmered it all until the rice I made was done. Voila. Simple and tasty dinner on a week night. You could always toss in a little sprouted tofu or meat for some added protein.

I used the mint in a tasty little salad that we brought to a potluck on Saturday. The salad had green and purple cabbage, cucumbers, carrots, and green onions all tossed in Bragg’s Amino Acids, lime juice, sesame oil, olive oil, ginger, and mint. I then marinated some watermelon in lime juice and cayenne pepper, and tossed that into the salad. I topped the salad with a few chopped peanuts. So tasty, and the mint gave it just the right balance.

These two were just tossed into one of our weeknight staples: the sausage and veggie bake. I rough-chop  seasonal veggies (in this case it was potatoes, beets, carrots, cauliflower, broccoli, and mushrooms), throw in some sliced sausage links, and toss them all with olive oil. I topped them with some onion, garlic, and the thyme and oregano. Then it gets baked in the oven until the potatoes and beets are tender. We served this with various mustards, but sometimes also serve it with pesto or romesco sauce.